Over the past 100 years, many flying cars have been built and hundreds have flown. They all failed because they were either bad cars, bad planes or both. 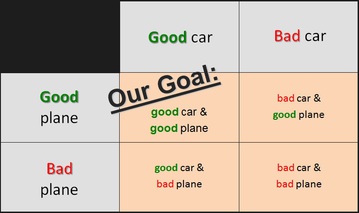 Carplane® took extra time to settle on a design which performs well in both air and road modes. Carplane®'s goal is to start closing the gap between car and plane travel.

Convergence between flying and driving has an immediate business case for recreational pilots: The private plane doubles up as a second car and hangar fees are eliminated when it's parked in the home garage. Most important, trips can be completed by road when weather deteriorates.

Despite the existence of numerous small airstrips, light aircraft fail as a transport option due to "the last mile" (i.e., the distance from the airstrip to the destination). Roadability solves this problem. For commercial travellers in the 200-1,200km range, the business case is significant time and money savings over cars and airliners - especially in regions where transport infrastructure is congested.

After settling on a design which performs well in both modes, Carplane® addressed certification issues. First, a list of certification requirements for both cars and planes was drawn up. With the help of modern design software which not only draws shapes but also calculates weight, Carplane® quickly determined that a fully-conformant vehicle would be too heavy for deregulated, "self-certifying" categories like ultralights and light sport aircraft (LSA - max. 600kgs/1,320lbs.). It was therefore decided to build the Carplane® for formal certification in the VLA (very light aircraft) category (max. 750kgs/1,653lbs.). This gives Carplane®'s customers the benefit of its safety having been tested by a Government authority.

[In this regard, Carplane®'s approach differs from other developers who apparently start building first, then claim they need exemptions to avoid requirements.]

3. No Folding/Reduction/Exposure of Critical Parts

Carplane®'s patented wing deployment mechanism simply automates what glider pilots do when they tow their planes to airstrips and manually attach the wings. The advantage over other concepts is that the wings/rotors aren't folded (i.e., they remain in one piece). This reduces weight and increases safety.

By storing the wings along the length of the vehicle at an upward angle, Carplane® achieves the longest possible, unsegmented wing length within the confines of a normal car. This reduces wing loading and increases aspect ratio, thereby enhancing both safety and performance.

By storing the wings between two hulls, they're protected from damage.

To conform to the strict particle emissions standards for road vehicles, Carplane® was forced to look beyond aviation motors - none of which can be adapted to meet road emissions standards. An appropriate automobile motor was found and is now in the final stages of certification.

a). For more than two decades now, the fuel consumption of many newly-built light planes has been lower than the average car. This is mostly due to lightweight* construction techniques and materials, aerodynamic improvements and high power-to-weight ratio engines. (*Carplane®'s empty weight is about half that of a comparable, 2-seat compact car.)

b). Compared to cars, further fuel economy derives from planes heading to their destinations in a straight line, thus reducing the distance travelled by around 40%-60% over roads.

c). More economy derives from not wasting time in traffic jams. (Currently, US commuters spend 52 mins. per day in traffic jams and travel at an average speed of 27.2kmh/17mph.)

a). Carplane® will be the world's first certified plane to conform with strict particle emissions standards for road use (see section above).

b). Compared to cars, particle emission concentrations can't build up but are diluted, instead, over a wide area.

Carplane® shields motor-noise between two hulls. A NASA* study found that such a configuration reduces noise by 20-40 decibels (*AIAA Paper 2006-2622). (Carplane® doesn't achieve quite that much dB-saving due to varying propeller intake speeds.)

a). Carplane® users need only one vehicle to both fly and drive.

b). The only infrastructure Carplane® needs is existing grass strips and communal roads. This conserves the landscape.

Carplane®'s takeoff distance is extra-short because it uses both its rear wheels and its propeller to accelerate.

Compared to other planes, Carplane®'s landing distance is extra-short due to disc brakes on 4 (rather than 3) wheels with block (rather than balloon) tires. Braking effectiveness is further increased by flaps which can be deployed beyond neutral to an "up" position to create downforce after touchdown.

This is a German car. Being certified for autobahn use means we pay more attention to handling, road performance and quality control. 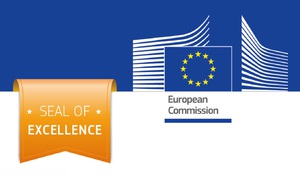 Seal of Excellence of the EU-Commission